After saying his goodbyes and promising to let everyone know about Mimi and Hank’s good news, he took off for home. It was a long drive and he looked forward to getting back on his ranch and seeing his family and friends. Matthew was a homebody at heart, but who could blame him?

His ranch was known all over the country. Other ranchers came to visit him from as far away as Oklahoma and Texas on a regular basis. In fact, that was how Hank had met Mimi. He had come to The Triple J Ranch to see how they raised their cattle and what exactly the secret ingredient was for such tender, juicy beef. The two cowboys became friends during that visit, and Hank got himself a bride.

Matthew was fairly outgoing and enjoyed having visitors. If it weren’t for his pet project of breeding horses, he’d never have to leave his ranch. Plenty of people visited often enough he didn’t want for company or good conversation. Not to mention his large family.

On the long drive home, Matthew thought about all the exciting things his family had done growing up. If he didn’t marry and have a large family, at least he’d have a lot of nieces and nephews. He was very confident his brothers and sisters would provide more than enough children to make the Triple J rowdy and full of love.

Maybe he didn’t have to marry after all. He could be the fun uncle that all the kids wanted to see. He’d be able to spoil them all rotten and then send them back home once he was ready to do something different. Wasn’t that what most grandpas and uncles did?

As he was approaching the turn-off to Beacon Creek, he noticed a large poster on the side of the road. It was propped up as though someone had put it in the perfect place for drivers to notice. The sign read, Just Hitched, and there were painted flowers around the edges of the white cardboard that had seen better days. The edges were frayed, and a tire tread ran through the middle of the sign.

“Great, people can’t even be bothered with picking up their trash anymore. What’s this world coming to if even the Montana highways are covered with litter?” He pulled over and picked up the sign and threw it in the back of his truck. He’d throw it in the burn pile when he got home.

Not wanting to think about the newlywed couple, he looked out in the distance to the Big Sky country that he loved so much. The sun was beginning to set, and the orange and red sky swathed in burnt sienna clouds settled his soul. The distant horizon was dotted with sharp mountaintops that he knew well. Come winter, they’d be covered in fluffy white snow. But today they were brown and green.

Behind him in his rearview mirror, he could still see the mountains he’d driven through not long ago. They were so tall and majestic they stole most of the sky from his view.

Something white ahead caught his attention, and he began to slow down. “No, it couldn’t be.” He didn’t know who he was talking to. Maybe God was listening? Either way, he continued to slow and looked around the sides of the road for a car or another person. There was nothing but the brush interspersed among the fields of hay growing alongside the road.

He stopped behind a woman wearing a tattered wedding dress. It had been white at one time, but now it was covered in dirt and bits of hay or grass. When he stepped out of his truck, the woman turned around and he gasped.

Her hair was a rat’s nest, her stare was vacant, and she had blood dripping down the side of her face that had already splattered her once-beautiful dress.

“Are you alright?” He cringed when he heard his careless words. Of course she wasn’t alright. The woman looked as though she’d been in an accident and rolled around on the ground before getting back up. “I’m sorry. My name is Matthew Manning. May I help you?”

She continued to stare at him with a vacant expression. The woman just stood there blinking back tears mixed with her blood.

He took a few steps closer to her and put his hands up in a placating gesture. “I won’t hurt you,” he whispered. “I’m here to help.”

She still hadn’t spoken to him. And he wondered what had happened to the poor woman. Was that her sign not two miles back on the road that he’d picked up? He hadn’t noticed any vehicles or signs of other people on the road. Where was her groom?

“Where’s your husband?” he calmly asked. The last thing he wanted to do was to spook the poor filly. But he had to know where the man was. Who knew if he was lying hurt—or worse, in a ditch somewhere along the road?

Without a word, she walked toward him. When she was only two paces away, her eyes flittered and she fell forward into his arms.

“Whoa. Ma’am? Ma’am?” He didn’t want to shake her, but she wasn’t moving and he wasn’t sure if she was even alive.

Matthew moved the woman in his arms so he could see her face. Her eyes were closed, but her chest was moving. Which meant she was breathing. The poor filly must have fainted in relief at finally seeing help. He looked around and didn’t see anything or anyone in the area.

They were only about thirty minutes from Beacon Creek. There were other smaller towns closer, but he didn’t think any of them had a clinic. The woman in his arms needed help. With only her best interests at heart, he picked her up and carried her back to his truck.

Once she was laid out on the bench seat in the back of his cab, he used the seat belts to hold her in place. It couldn’t have been comfortable for her to have the belts digging into her back, but he didn’t know what else to do to keep her safe.

Before he got back in the driver’s seat, he felt the pulse at her neck and on her wrist. Her heartbeat seemed strong. Then he noticed the gash on the side of her head and found a clean shirt from his duffel and wiped the blood and dirt away.

Head wounds always bled the worst, but hers had already started to clot. He knew that was a good sign, but it also meant she had been bleeding for a long time. It also explained all the blood on the front of her dress, in her hair, and on her face.

Matthew left the shirt on her head and got into the driver’s seat. Using the Bluetooth connection on his truck, he called 911.

“911 operator, what’s your emergency?” The woman on the other side of the phone sounded calm and cool, which was not how he felt at that moment.

“I found a woman in a wedding dress on the side of the road. She’s bleeding and unconscious. But there isn’t a car or another person around.” Matthew explained exactly where he was and where he was taking the bride.

The operator took all his contact information and said she would ensure the Beacon Creek Clinic was ready for his arrival. Then she said she would send a patrol car to look for the woman’s car and possibly another person on the side of the road.

With all the area small towns, farms, and ranches, it would be difficult to know where she had come from and who she was. They would have to wait for her to wake up. The 911 operator informed Matthew that there were no missing bride reports and no accidents had been reported on that highway for the past few days.

When he hung up, he hit his steering wheel and sped up. The poor woman did not have anyone looking for her, which meant she could not have been gone long. But what about her groom? She must have just married and been on her way to Bozeman for her honeymoon. Maybe they were going to fly out of Bozeman Yellowstone International Airport and go somewhere tropical for their honeymoon?

He shook his head and refocused on the road in front of him. It would not do any good for him to speculate where the woman was heading before getting into an accident. He had to get her to the doctor…fast.

“Hang on little filly, I’ll get you to the doc right away.” He looked through his rearview mirror to see the cowgirl lying on his seat, eyes still closed. No more blood had trickled down her face, which was a good thing. At least she would not be losing any more blood before he got her to the clinic.

He did a double-take when he noticed the light-blue boots on her feet. Only a cowgirl would wear boots under her wedding dress.

Whoa-howdy! LOL What do you think so far? Want to read more? Then pick up your pre-order now of Runaway Cowgirl Bride and when it goes live on June 15th Amazon will automatically download it to your account for you! 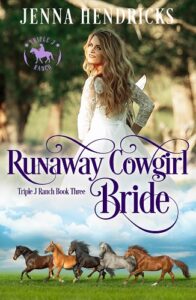